Objective: To evaluate the semantic and letter verbal fluency performance of older adults with hypertension and/or diabetes (CVR group) and without these risk factors (NR group).

Method: Participants were 60 older adults, 30 from the CVR group and 30 from de NR group, whom completed a neuropsychological assessment at baseline and after two years. Neuropsychological assessment included a semantic verbal fluency (naming animals) and letter verbal fluency task (naming words that begin with letter f). Correct Responses (CR) were analyzed for both fluency tasks, Mean Cluster Size (MC) and Switches (SW) were analyzed for the semantic task, which are measures of Semantic Memory and Controlled Retrieval, respectively.

Conclusion: Semantic Fluency decline is accelerated by cerebrovascular risk factors, specifically because of a reduction in Controlled Retrieval.

Old age is associated to changes in brain structure and function. Subclinical Cerebrovascular disease may be partially responsible for these changes, especially those in the prefrontal cortex, because white matter lesions and neurotransmitter depletion are age-associated changes in anterior brain regions compared with posterior regions, suggesting preferential vulnerability for frontal regions1. These changes could affect cognitive function such as memory and executive functions, leading to what is known as Vascular Cognitive Impairment (VCI), which includes a pre-dementia stage2. The mere presence of cerebrovascular risk factors (CVR), such as hypertension and diabetes, increases the risk for subclinical cerebrovascular disease and accelerates brain and cognitive decline2,3,4. The high prevalence of hypertension and diabetes means that many older adults are at risk of VCI.

Verbal Fluency tasks are associated to the left prefrontal and temporal lobe7, and are predictive of problems in daily functioning8. They consist on producing as many words as possible within one minute without any external cues, and involve two neurocognitive components6,9, Prefrontal Controlled Retrieval10 and Semantic Memory. This is because producing words requires the activation of lexical representations in the temporal lobes, and this is achieved through biasing signals from the ventrolateral prefrontal cortex11,12 when there are few cues from the environment. When a lexical representation is activated, automatic activation spreads to other representations that are related to it13, leading to a tendency to produce clusters of related words (farm animals, animals from Africa, aquatic animals) as long as semantic memory is intact. There is less prefrontal involvement for producing clustered words and more when switching between semantic categories10.

Overall performance, Semantic Memory and Controlled Retrieval in verbal fluency tasks are measured with the total number of Correct Responses (CR), Mean Cluster Size (MC) and the total number of Switches (SW), respectively6,9. There are also two types of Switches14, Hard Switches (HS) between a cluster and a non-clustered word, and Cluster Switches (CS) between a cluster and another cluster. The former being a purer measure of Controlled Retrieval, since there is less automatic activation between lexical representations that are not related to each other, requiring more top-down activation from the Prefrontal Cortex for their retrieval10.

Although there is evidence that CVR accelerates decline in verbal fluency’ overall performance in non-demented older adults15, it is not well understood how the underlying neurocognitive mechanisms of verbal fluency are affected. Deficits in Controlled Retrieval and Semantic Memory could lead to different problems in daily functioning and require different compensatory strategies.

Therefore, the objective of this study is to analyze verbal fluency performance and its two neurocognitive components in normal old adults with and without CVR, and to follow-up their performance after two years. In this study, only hypertension and diabetes are taken into account to classify participants as having CVR or not, as the effect of other risk factors on cognitive functioning is less consistent4.

We hypothesize that participants with CVR will have lower verbal fluency performance and that Controlled Retrieval, and not Semantic Memory, will be affected, as measured by CR and SW.

Sixty old adults (38 women) who did not meet the exclusion criteria, such as the presence of dementia and psychiatric disorders like anxiety or depression, were studied in 2014 and had a follow-up in 2016 (see Table 1). Thirty had hypertension and/or diabetes (CVR group) and 30 did not (NR group). The sample was obtained from a larger study, the CIMVAC, which consists of neurological and neuropsychological assessments of retired workers of the Universidad Autonoma de Nuevo Leon and their close relatives of old age. All of them signed an informed consent form. The CVR group (21 women) had a mean age of 69.9±5.7 years and 13.7±4.7 years of education, while the NR group (17 women) had a mean age of 69.3±5.5 years and 15.5±3.9 years of education. There were no significant differences in sex, age, and education between both groups (p>.05). With the exception of one subject in the NR group who had a previous myocardial infarction, none of the participants had any previous heart condition. There were participants with dyslipidemia in both groups, 8 in the NR group and 13 in the CVR group, but this difference is non-significant (p>.05). In the CVR group, 5 participants (25%) reported not taking any medication to treat their hypertension or diabetes at the time of the first session.

The inclusion criteria were the following: age equal to or greater than 60 years old, have or not have diabetes mellitus type 2, have or not have systemic arterial hypertension, have five or more years of education, acceptance to participate and sign the informed consent.

The exclusion criteria were the following: having less than five years of education, dementia, depression, anxiety, non-competence in activities of daily living, prior history of stroke, moderate or severe traumatic brain Injury, epilepsy, Parkinson’s disease or other diseases of the central nervous system, and not completing the neuropsychological assessment both at baseline and at the follow up session. The presence of psychiatric disorders and daily functioning was assessed through psychological instruments described below, while neurological conditions were determined by standard physical examination and medical history. The cut-off score of 24 in the MMSE was chosen to categorize participants as having dementia or not, since this has been shown to have good sensitivity and specificity to dementia even without any correction for years of education for people in Mexico16. We excluded participants with less than five years of education because of the effect of this low range of years of education on verbal fluency and MMSE performance, and in order to control for differences in years of education between both groups.

The protocol of the study was submitted to the Research Ethics Committee of the Faculty of Medicine of the Universidad Autonoma of Nuevo Leon and was approved with the number NR07-005. Participants completed a neurological and neuropsychological assessment at baseline and at a follow-up session after two years. The neuropsychological assessment was performed by a neuropsychologist or by trained assistants. It consisted of a neuropsychological battery, the Neuropsi Breve, which includes Semantic and Letter Fluency, the Mini-Mental Status Examination, the Geriatric Depression Scale short form, the Adult Manifest Anxiety Scale, and the Instrumental Activities of Daily Living scale. After two years, they were asked for a follow-up session via phone.

Semantic verbal fluency and letter verbal fluency consist of naming animals and words with a certain letter for one minute. Letter verbal fluency requires words that start with the letter “F”. We used Troyer9 approach to measure Mean Cluster Size and number of Switches, and Abwender14 approach for measuring Hard Switches and Cluster Switches. We used Troyer9 criteria, with some modifications for the Spanish language and the Mexican population, to determine how words are semantically and phonological related to each other to form clusters. For example, the words “vaca”, “toro” and “buey” are semantically related, and the words “gato” and “pato” are phonological related in Spanish language.

Repetitions and Rule Breaks were not counted as CR and were not taken into account for cluster size, however their position did count in determining switch subtype. 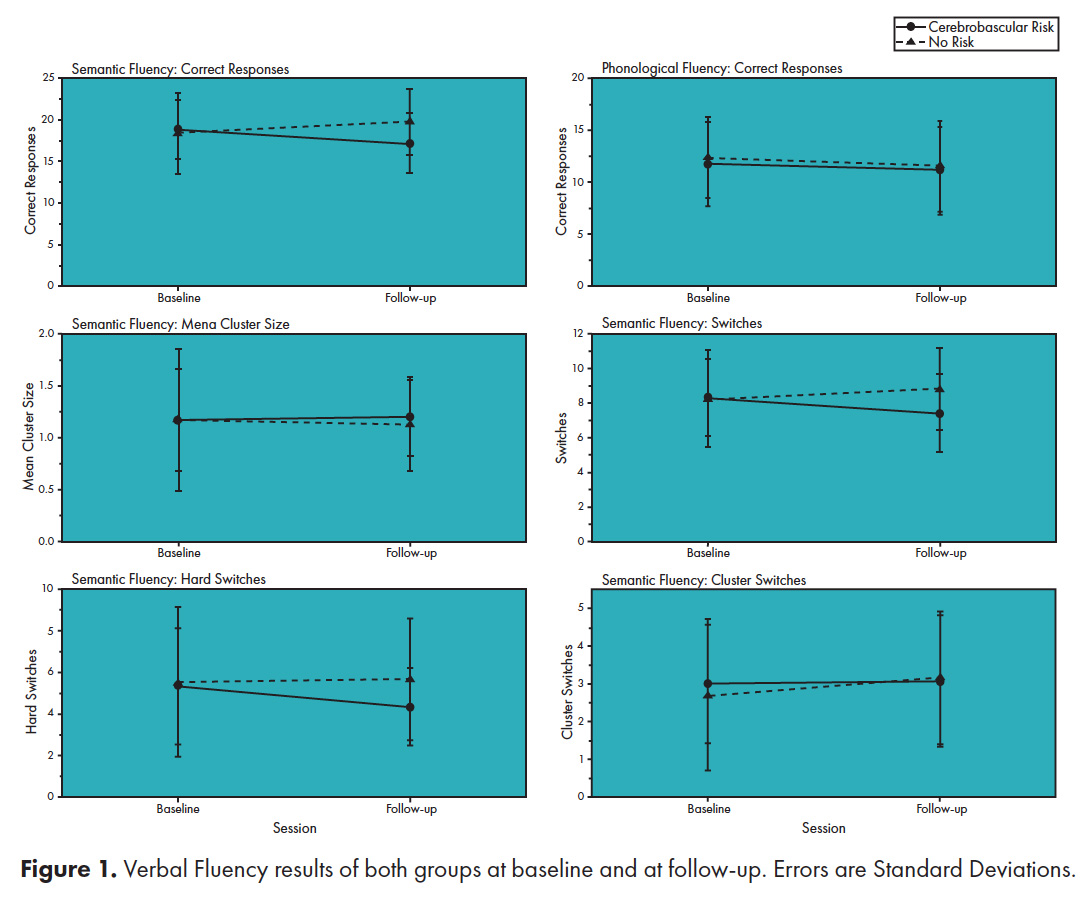 Decline in overall performance is accelerated by cerebrovascular risk factors on semantic, but not letter fluency. This is the common pattern seen in normal older adults, as only their semantic fluency declines and seems to require compensatory activation of bilateral prefrontal cortex17. Other researchers have found similar results of lower performance or accelerated decline in cognitively healthy people with cerebrovascular risks factors4, 15, although not always18, possibly because of different risk factors in their sample.

Controlled Retrieval, and not Semantic Memory, is the cognitive component of verbal fluency that is affected by cerebrovascular risk. This supports the fact that the structure most affected by cerebrovascular risk is the prefrontal cortex. It also means that memory representations are not being lost but that there is a problem in accessing them due to the accelerated brain loss caused by hypertension and diabetes. This could manifest itself in daily life as a more frequent “tip-of-the-tongue” sensation when speaking.

Older adults, especially those with cerebrovascular risk factors, should receive periodic neuropsychological assessment in order to monitor their cognitive health, and cognitive stimulation, such as working memory training, which has been shown to improve cognitive performance and increase prefrontal connections to the posterior cortex20. One problem is that because of the insidious effects of hypertension and diabetes on the brain, and the recurrent belief that cognitive decline is a natural part of life, many older adults don’t seek cognitive-related services until they reach dementia. An effort must be made to educate the public about the risk factors that accelerate cognitive decline, the importance of cognitive health and the steps that can be taken in order to improve it.

Risk factors for cerebrovascular disease, such as hypertension and diabetes, have an effect on cognitive functioning, specifically on the semantic fluency that depends on the prefrontal lobe. The good control and prevention of risk factors can reduce the risk of presenting cognitive deterioration or dementia in older adults.

The study was supported by the Faculty of Psychology and the Neurology Service of the UANL.

The authors thank the collaborators of the CIMVAC project, specially to Carolina Madrid, Samantha Galván and Gabriela Castro.

We declare that we have no financial and personal relationship with other persons, organizations or entities that could influence this article.